Rising damp is a major problem to residences and buildings in Gauteng. Not only is it unsightly and substantially reduces the value of properties, but damp inside the home can be a health risk to children, the elderly and those with low immune systems. Another unwanted side effect is that damp walls reduce thermal efficiency and can make homes much colder during the winter season. 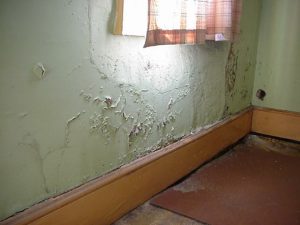 The cause of rising damp is mainly due to poor building practice as well as poor architectural design. Common problems include no DPC (damp proof course) or incorrectly installed DPC. The DPC is a liner, usually made of heavy duty plastic which is installed just above floor level in between the bricks to prevent damp rising from the wet zone which is the brickwork situated mainly below ground level and built on the foundation. Another common cause is plastering and Painting of the wet zone area which is below the DPC layer. This should rather be left face brick which allows the wall to breathe instead of trapping the moisture in the wall.

Whilst rising damp is very easy to prevent at time of construction, it is unfortunately very expensive and inconvenient to repair afterwards. However fortunately, the technology exists to permanently cure damp walls.

Quick fix methods to hide the symptoms of rising damp such as applying special primers are at best very temporary and usually a complete waste of time. The only way of properly and permanently curing rising damp is to completely the remove the contaminated plaster. A special cementitous coating layer is applied to the exposed brickwork to seal the damp, but will still allow the moisture in the wall to escape and breathe in the form of water vapour. An important part of the treatment process is to inject a special silicone cream into the base of the wall to prevent further damp from rising up. This creates a chemical damp proof barrier as it is not possible to retro fit a mechanical barrier. The final step of the treatment is to apply a double layer waterproof salt retardant plaster. This is a blended mortar mixture which contains two chemicals, namely a waterproofing agent and also a salt retardant to prevent the white powdery salts from contaminating the plaster again. Roof waterproofing contractors, Roof Repairs specialists, or contractors, in general, have a bad name because of a few rotten apples. There are some rules to adhere to when hiring a contractor. You have to research them thoroughly before you sign on the dotted line to ensure they are who they say they are. Also, it’s never a good idea to choose the cheapest quote. Chances are shortcuts will be taken to recoup lost money and you’ll be at the receiving end of it. Here’s why you should consider hiring a professional waterproofing contractor instead.

For more information about roof waterproofing or if you require a free consultation and quote, get in touch with us today!